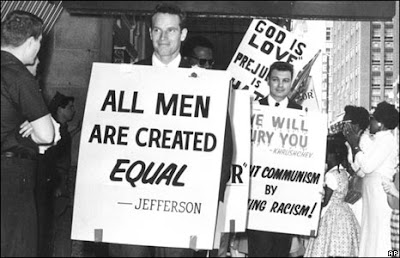 Charlton Heston had, quite rightly, been much maligned for the last couple of decades of his eventful life. There is no doubt that Heston's strong support for Americans' rights to bear arms and his presidency of the NRA, gave much surfeit to an industry that is responsible for the deaths of every American who has killed another human being with a gun.

However, we should not remember Heston as 'just another right-wing gun nut' and that, for Americans, arguing for the right to bear arms is not purely about guns.

It is true that it is hard to ignore images of Heston with his rifle held aloft daring anti-gun lobbyists to pry the gun "from my cold, dead hands." For Americans the right to bear arms is enshrined in the constitution as the second amendment. of the Bill of Rights. The constitution is America, and to change it would require an almighty effort; and any change to the constitution would be profoundly uncomfortable for the majority of Americans.

That is not to say that Heston was right to defend guns themselves or that I agree with him whatsoever. There is no place for guns in the 21st century and Heston's views often belonged to a previous age. However, let's not forget that Heston was once as rigorous a defender for the rights of black Americans as much as he ended his life as a advocate for guns. When anyone dies we should remember the good they brought to the world and in standing against white racism and segregation Heston helped to bring a lot of good into this world.

Ben Hur was a hell of a movie as well.