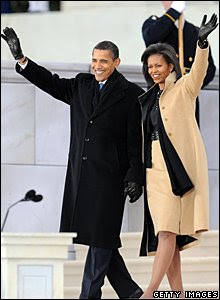 Amidst all the (quite understandable) hope surrounding the imminent inauguration of Barrack Obama there has to be a certain amount of nervousness amongst even his most ardent supporters.

George W. Bush's reign may have left America's global image in tatters, but it is the consequences of his administration's domestic policies that may prove to give Obama his greatest challenge. The US budget deficit will hit $482 billion in the 2009 budget, and this does not even take into account ten billion dollars worth of additional funding for the war in Iraq. As the US plummets further into recession, Obama now faces the kind of economic challenges not faced since Franklin D. Roosevelt and The Great Depression of the 1930s.

It is hoped by many that the 'Obama Effect' will result in such a surge of hope, that the US economy will ride the recession on the crest of a wave of positivism. However, the US economy is, like most capitalist economies (and given its embrace of capitalism more than most) suffering from decades of mismanagement. Successive US administrations have failed to implement legislation to control the greed of the big US banks. Bush may have, through record defence spending and ludicrous tax cuts being largely responsible for the budget deficit and at least partly responsible for the overall economic downturn. But successive administrations (at least starting from Reagan) have failed to control Wall Street. Indeed, Wall Street through various lobbying groups has instead had far too much control over The White House.

Obama now, benefiting from his immense popularity and an ability to build strong relationships with both Houses, could well be able to make many of the policy changes required to get a hand on the shoulder of Wall Street. However, the American people are too fearful of the left to allow him to ever shackle Wall Street entirely. As such it is likely that Wall Street will be able to escape the wrath of the American people relatively unscathed, as the economic downturn spreads to other sectors of the economy, taking with it small businesses.

With regards to foreign policy, one only needs look at the Israeli attack on Gaza to see that the Middle East will again be a huge problem for the new President. Bush's administration shocked the rest of the UN by preventing the Security Council from issuing a statement demanding an immediate ceasefire from both and Israel (a statement the US had previously had a large role in creating). This decision, along with Bush's pointed refusal to criticise Israel and to instead lay the blame solely at Hamas' door has managed to isolate America and Bush's administration even further from the rest of the world.

Israel has faced a constant barrage of rockets from Gaza and it has continuously warned Hamas that it would retaliate in force. However, the massive and disproportionate use of force should be criticised by an administration and a President that see themselves as the moral compass for the rest of the world. The irony of the Bush administration demonising Russia for attacking Georgia, and then refusing to even criticise Israel has not been ignored by European governments, much less by Middle Eastern states.

Obama now faces that most difficult of tasks - how to manage to convince two states who only know hatred for each other to seek peace rather than revenge and reason over religious fundamentalism. Bill Clinton failed, George W. Bush took a side to the detriment of understanding and now Obama has been given this most poisoned of chalices. It is difficult to see how a man, even one as accomplished a statement as Obama is, can manage to restore America's image enough to bring about any kind of peace talks.

Finally, Obama takes on a country that is as divided now as it has ever been. Despite his huge popularity (my favourite bit of merchandise is the Obama condom), he is hated by a great deal of Americans. There are many Southern states that will never vote for a Democratic President, never mind a black one. There has been a spate of gun sales following Obama's victory in Southern states such as Bush's home state of Texas. This has not been I should add (or at least not publicly so) because of the new President's ethnicity or liberal upbringing, but more because they fear he will take away their freedom to purchase fire arms. This demonstrates the pervasive fear of liberalism in these states, a fear that Obama will struggle to deal with and to unite his country in the face of some of the biggest challenges faced this century.

We live in an exciting time, with a new and extremely exciting President. I am sure we in Europe all hope that Obama can be all we have hoped for in a US President for so long. However, it is in that hope that fear is born, a fear that he cannot meet expectations that are surely too much for one man, even one as impressive as Barack Obama 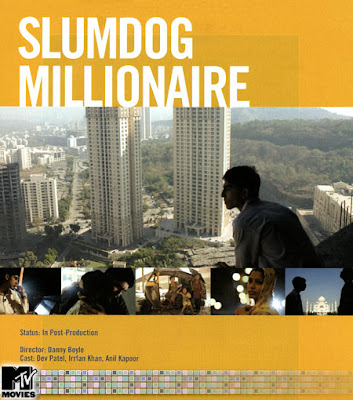 I had to stop writing this blog temporarily for personal reasons but now I am back and raring to go. I hope people will read this and comment on my blog entries!

The first of which is a movie review. This is something I have not done before and must admit to being more of a reader than a moviegoer (although, ironically, that is the title of one of my favourite books). This film was so wonderful, though, that I felt an overwhelming need to sing its praises.

Although Danny Boyle's film is based on a true story, it is likely that the events are only loosely based on the real Jamal Malik's experiences. However, the film manages to capture the reality of living in a slum in Mumbai, with all the poverty, prejudice and violence faced by the 'Slumdogs'.

Boyle also brings with him the energy and verve seen in previous films (such as Trainspotting where he turned a mediocre book into an excellent movie and the excellent 28 Days/Weeks Later). He has kept the high tempo music and quick moving photography throughout, creating a film that is both stylistically polished and deeply moving.

The childhood scenes are particularly moving, with the full depravity of the slums shown and how a gangster called Maman, masquerading as a good samaritan, takes Jamal and his brother in and uses them as child beggars. They witness other orphans being blinded and disfigured and taught to sing in order to make more money begging.

However, the heart of this film is a love story between Jamal and Latika. Latika is loved by Jamal from when they were kids and Jamal loses her three times in the film: once to Maman, once to his tainted brother and finally, and most movingly at a train station as she agrees to escape with Jamal, only to be recaptured by his brother and his brother's odious gangster boss. Jamal's love for Latika ensures that he finds her each time, until the train station when she is whisked away.

Jamal still finds her. Knowing that she watches Who Wants to be a Millionaire?, hoping for escape, he himself hopes to again connect with her.

The majority of the film is set in a police station after the morally corrupt gameshow host (Anil Kapoor) ensures Jamal is arrested, believing he must be a cheat because he is a Slumdog. Following torture and interrogation the police inspector eventually realises that Jamal is not only telling the truth, but that his remarkable life story has helped him to answer the questions in the show. However, what the inspector realises most of all, though, is that Jamal is not interested in money, only in Latika and connecting with her again. Dev Patel is excellent, managing to demonstrate both innocence and determination, as Jamal seeks to once again find his lost love.

The fact that the ending (complete with a Bollywood style sequence during the credits) ends with Jamal winning both the money and the girl does not mean that the film loses its integrity. Indeed this film could only have finished happily, celebrating the best parts of India and humanity as a whole. This is is a story that is comparable to Romeo & Juliet, but the lovers go through enough to deserve the ending of a comedy.

I strongly recommend this film and think it is certainly a dark horse for Best Movie at the Oscars. I hope you enjoy it as much as I did.