Hatton May have Lost but England have a New Punchbag

The nation awaited as Ricky Hatton promised to become the 'greatest', the 'best' and the 'most famous' boxer in the world. While the odd sports journalist popped in the odd jab, with warnings about the massive gap in class between Hatton and his opponent Floyd Mayweather, they were out-punched by the nationalistic and groundlessly opportunistic tabloid sports writers. We were promised by the tabloids that a down-to-earth man would be able to demonstrate that the staples of the British identity (a poor diet and copious amounts of beer) were more than a match for Johnny Foreigner. Unfortunately he lost and we were all left to vote for the 'other boxer', Joe Calzaghe, for the BBC's Sports Personality award.

With the rugby team falling at the final stage and Louis Hamilton demonstrating that hubris does not necessarily lead to championships, not to mention the failure of the football team to even get to a stage where they could be judged as failures, we have been left with a bit of a sports vacuum. Failing another success at an obscure sport of little note until we win a medal in it (e.g. our towering sporting success at curling), we are going to have to put all our efforts back into the national sport, and into a brand new manager.

England managers have always been hard done by. Considering the fact that there are very few players of any real ability, coupled with the fact that those very same players are paid ridiculous wages that gives young men, from generally poor backgrounds, a level of pomp and omnipotence few political leaders will ever have, has meant that their is a massive gulf between expectations and reality. These managers have perpetuated this problem by consistently promising the world because that is, it seems, the main part of their job. Steve McClaren was the biggest failure England have ever had, largely due to the fact that he embodied both the mediocrity of the English team and the illusory nature of the England 'team'.

Now we have Capello and he is going to be the man who sorts out the prima donas who will make us all fighters. Already though we have the tabloids questioning his nationality, not to mention his grasp of English which, admittedly does appear to be more than limited. In response we have soundbites from the Brian Barwick and attempted soundbites from Capello himself.

Perhaps the answer to success for England (apart from nurturing better players) is to simply cut out the heavy-handed politics and concentrate on what is, after all, a sport? Or perhaps Bill Shankly was only a little bit off the mark when he said football was more important than life and death, perhaps it more important to the English nation than reality.

The Myth of Princess Diana 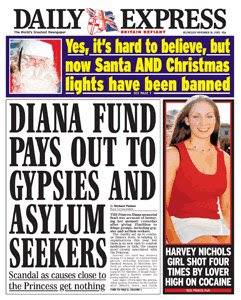 Princess Diana died in a car accident. Despite all attempts to make this into a conspiracy story, particularly by the British newspaper The Daily Express (pictured), which has shown an obsessive, bordering on manic desire to make a scandal out of Diana's death.

The desire shown by the paper and the other tabloids, magazines and websites, who have repeatedly tried to make a story from a woman's death is particularly morbid considering the very same people used to use Diana's life as the main staple for their headlines.

Diana is commonly thought of now as a saint, as someone who was in touch with the average person on the street. There is no doubt in my mind that she has done some good (for example the debate on landmines), but she could also have done a great deal more.

The facts behind her death are that she left a luxury hotel in the company of a rich playboy, in a chauffeured car. Sure, she was not responsible for the disgraceful tactics of the paparazzi, but she did regularly court, and even manipulate, the press.

Princess Diana was not a bad person and did not deserve to die in such a horrible way. Nor did she deserve to be in such an unhappy marriage. However, the collective grief shown in this country after her death was an embarrassment. Mother Theresa died at a similar time but there was no collective grief and barely even an acknowledgement.

I am a Republican, but even I can empathise with the Royal Family, and their incredulity at the level of national grief, and the subsequent vitriol directed at them.

Fundamentally I would like to ask the reader to tell me one thing this woman did to make her a saint. What did she do to deserve the shocking amount of money spent on coroner's inquests, civil court cases and investigations in France?

We are always trying to find something more than our current lives; something better than ourselves. In the majority of countries religion is still prevalent but, even in the USA, the majority of developed countries are still populated with people who either don't believe in a God, or don't know anything about the God they purport to believe in. As such we have embraced celebrities and, as in the case of Diana, have been successful in making them Gods. Perhaps what we really need and, perhaps, Diana would even agree is to let go of our need to cling to kings & queens, gods and dead princesses. If this were to ever happen I would gladly give a 2 minute silence for all the saints we have worshipped in the past and, more importantly, heave learned to let go of.

Food, we are constantly being told, will be the death of us. We are inundated with new ways in which even the most humble of staples to our diet could lead us to an early grave. Ordinarily, when the tabloids work up a head of steam for something as much as they have done for the latest food scare (the carcinogenic properties of a bacon buttie) I tend to ignore it as I do their constant attempts to turn Princess Diana's death into something more controversial than a driving accident. However, a trip to my local Waitrose has led me to a certain amount of food fury.

Let's face it the British on average have a terrible diet. We are currently falling behind the rest of Europe with our cancer mortality rates and the NHS is taking the brunt of the blame. However, is it not possible that the other countries in Europe have lower mortality rates because they tend to eat food that is fresh and nutritious without any reconstituted vegetable matter or reformed chicken carcasses? Another recent study, as reported on the BBC website ( 'Burned foods' linked to cancers) has been added to the mountain of research that already exists arguing that poor diet is a major cause for nearly all forms of cancer. This study points to burned carbohydrate rich foods (potatoes for instance) and the acrylamides produced as a result. These acrylamides cause cancer in much the same way as heavy amounts of red meat are said to do. Fundamentally, the point should be made that it is not a certain type of meat or vegetable that is at fault, but rather our love of processed food.

In my daily life I am surrounded by people who eat mainly out of a packet. Tins are largely shunned as the packet provides a fresher look and, more importantly, easy access. Also, the takeaway in London is king, with many people regularly eating a takeaway ever day. Is it any wonder, then, that we are so unhealthy as a nation. Even if the food scares are exaggerated (as they no doubt are) there is no doubt that a healthy diet will help people suffering from serious illnesses to recover.

I admit that the German diet is even worse than our own got the levels of processed red meat. However, even the German diet allows a little more balance and a fresher ingredients. The continental diet is generally far better than our own with more variety, particularly when it comes to seafood.

The British simply don't want to touch the stuff. My nearest Tesco has gone as far as removing its fish monger altogether and has the most pathetic fridge presenting its customers with 'crab' sticks and cod in breadcrumbs. We are an island and yet seem to have no desire to eat fish! The Japanese who, despite high levels of smoking, salt in their diets and alcohol consumption still manage to live the longest mainly because they are passionate about seafood. People refuse to eat fish for several reasons, but I have summarised several of them below:

All these reasons are based on ignorance. Fish is cheaper than chicken and fresh sardines are a hell of a lot tastier than a chicken vindaloo from your local takeaway. The British are profoundly ignorant about food, which finally brings me back to my trip to Waitrose.

As I waited at the deli counter for a lump of pate I was longing for I had to help a shop assistant with a most embarrassing dilemma. An old man wanted a salad without any seafood (a fine English fellow) and the shop assistant was trying his very best to advise him. Unfortunately the shop assistant was not sure about whether artichokes are a fish or not. He consulted his colleague and she too was at a loss as to what an artichoke is but was pretty sure that it sounded like a fish, particularly with the terrifying concept of the tub being full of hearts. Despairing and a little desperate to get back to work on time, I had to inform them that an artichoke is a vegetable. Now these shop assistants are not stupid but, like the majority of the British population, they are ignorant.

My father was introduced by my mother (an immigrant) to peppers and to tin-less mushrooms and it was not long ago that we thought that Blue Nun was the height of sophistication. However, as much as we have opened up to new tastes and flavours we have also closed up even more. More and more kids are completely ignorant of where food comes from, even the simplest of foods.

Equally, the environmental waste caused by throwing out crisp packets, takeaway wrappers and microwave meal packages is a travesty. We have been brought up to waste food rather than to treasure it, to digest it rather than eat it.

What we need is to force kids to eat better food, but also to teach them about what food is and how to create decent meals for themselves. I'm not saying this is a cure for cancer or even for obesity, but it will repair some of the neglect of past generations and, perhaps, however rich or poor we may be we will know what decent food is, where it comes from and how to make it.