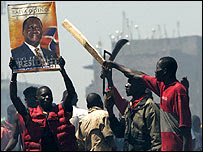 Kenya is the latest developing country to find itself retreating back to tribal violence. The media once again has brought us images of machete wielding clansmen bent, reports of gang rapes and genocide. 2007, perhaps even more than any other year, saw the violence caused by tribal feuds in countries such as Iraq and Afghanistan. However, the present situation in Kenya has demonstrated not only the horrific effects of sectarian violence, but also the media's willingness to show it and the failures of a central government system to replace the tribal system.

The situation in Kenya, as the BBC's Mark Holmes intelligently argues, is not simply another story of warring tribes as Kenya had not previously fallen into tribal fighting for decades. The present sectarian violence has its roots in the alleged corruption of a central government. Although President Mwai Kibaki is a member of the largely dominant Kikuyu tribe any initial anger was caused by his governing party's alleged vote-rigging.

Mark does point out that the headlines generated by the media are understandable, considering the fact that one could never create a strong, shocking and immediately interesting headline if it also allowed for the complicated nature of the story itself. However, one cannot help feeling that to jump to tribalism again and again smacks of a superiority complex felt by the western media and the people who consume it.

When the central government failed and a government many felt had undemocratically re-elected itself kept power there were understandable protests. It is also understandable that when a political system fails that the populace will turn to what was there before, and that was tribalism.

Don't get me wrong - I'm far from a Neo-Tribalist, and I have only ever admired Rousseau for the quality of his prose, not his dubious and hypocritical diatribes. Central government is key to any modern society and is essential for a democracy. This government needs to be accountable to the people and, if it is not, fails.