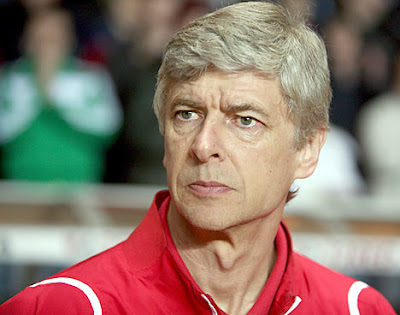 Sports news will appear in this blog occasionally and I have absolutely no idea when. Probably just when there are at least two 'SHOCK STORIES'. We are sticking with football for today's entry, as it has two such SHOCK STORIES.

The latest SHOCKER is that Arsene Wenger is a bad loser. Admittedly this fact is not too much of a surprise as he has shown, throughout his illustrious career of winning lots of things that he is not keen on failing to do so. However, he has clearly gone a little too far with his completely insane rant concluding with accusations of referees conspiring against his team. I was fortunate enough to watch the match (a pulsating affair, dominated bt Arsenal but won by Manchester United), and I can claim without bias, that William Gallas handled the ball and that it was a freekick. It is inconsequential whether Arsenal deserved to win, whether they deserved at least one penalty when they played Liverpool and whether referees make mistakes; it is farcical, offensive and downright ludicrous to accuse referees of a vast conspiracy against Arsenal. Let's not forget that Adebayor clearly palmed the ball into the net to claim Arsenal's opening goal and, however deserved it was, they should not have been given it by the referee.

The second SHOCKER was the shameful treatment of Rafael Benitez by his club's owners. Despite some often bizarre decisions by Benitez, he has been the most successful Liverpool since Kenny Dalgliesh and (unlike the latter) done this with his own team. He is popular with the fans, accomplished as a tactician and well respected by other managers. One would not bet against Benitez out-thinking Chelsea in the Champions League yet again and reaching a third final in the competition in four years. And yet the owners of his club are talking to a German who lives in California and has never managed in the Premier League or the Champions League. What is going on at Liverpool?

When one adds the owners' squabbles and Rick Parry's attempts at resolving the in-fighting by falling out with everyone, and you have the classical Premiership farce.

Liverpool are not a team to be messed with, however. With such a loyal fan base across the world and in the ground itself and with such a great history of success behind it, the current owners have to make the right choice. They are not the right people to run Liverpool FC and, even if DIC are not, they certainly cannot be worse.

It is a sad state of affairs that one of the world's greatest clubs has been handled in such a despicable way and it, like Wenger's overreaction, points to the game's biggest SHOCKER; a lack of respect in the game, and in the way its most powerful individual's treat the people who make the game what it is.