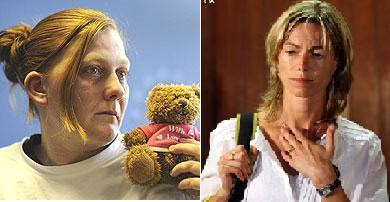 Two stories that have dominated the tabloids have been the 'abductions' of two very different young chlildren.

In The Independent (before Karen Matthews was arrested for having some part in her own daughter's disappearance) the newspaper contrasted the two different cases.

The McCanns' case received a cast amount of positive media coverage, monetary donations and support from celebrities, politicians and even, most famously, the pope. The Independent used the following figures to illustrate its argument that there was an unfair amount of attention given to the McCanns' case because they were middle class, successful and respectable as opposed to the Matthews case where a woman has had seven children, with five different fathers and who lives in one of the most deprived areas of the UK:

Public donations: Thousands at most, including Leona Lewis.

The fact that there are so many blogs (e.g. Justice for ALL the family), that there were so many posters put up around the world (I saw several in Japan and Korea, for example) and that there was such a huge amount of international media coverage - all devoted to "Maddie"- demonstrates an unprecedented level of interest in a missing child.

The comparison between the two cases is certainly a sharp one. There are other reasons for the success of the McCanns' media drive over that of Karen Matthews. Kate McCann is slim, attractive and photogenic and her husband appears to be loyal & supportive as well as being erudite and media savvy. Karen Matthews demonstrated a very poor grasp of English and can hardly be described as photogenic.

Despite The Independent's earnest attempt to highlight an apparently wronged mother, few now believe that Karen Matthews is not in fact the wrong-doer. The tabloids have gorged themselves on stories of the 'chav' single mother being arrested for perverting the course of justice (e.g. The Sun's headline Shannon's Mum Karen in knicked); they have fallen over themselves with the arrest of Craig Meehan (Sharon's stepfather) for possessing child pornography and the Waltonesque size of her otherwise far from Waltonesque family.

The majority of the public have difficulty believing that a pretty, middle class mother could conceive of murdering her own daughter and yet, when if comes to a 'chav' from a rough estate they have no difficulty believing the worst. Karen Matthews is not guilty of murdering her daughter as she is still, thankfully, very much alive. However, Matthews is almost certainly guilty of perverting the course of justice and of being in some way behind her daughter's 'abduction'. It is hideous that that her now ex-boyfriend possessed child porn and that she allowed him and his uncle, Michael Donovan, to hide her child in the drawer of a divan while pretending to police and the public that she was an innocent victim.

She also tried to claim money from the fund set up by the McCanns to find their daughter and other missing children. It would seem that she had seen the success of the McCanns' campaign, and the millions of pounds made and wanted a piece of the action.

The story, like the McCanns', is fascinating and the public cannot wait to turn the pages of their newspapers to find more. However, it seems to me that people are interested in the Matthews case because of all the negative aspects of humanity represented by the family, whereas they are more likely to be interested in finding Madelaine safe and sound.

Perhaps these two stories are less about the abduction of a child, and more about the mothers. However poorly the Portuguese police have acted and however incompetently, they did find evidence which suggested the McCanns' guilt in their daughter's death. The DNA evidence, found in a car rented by the McCanns' two weeks after their daughter's death was not enough to convict them, but they will remain aguidos as they are (thus far) the only credible suspects. I am not saying they are guilty and, if they are innocent they have every right to use every method at their disposal to find their daughter, but there was at least some evidence to the contrary and the police are right to treat them as suspects as long as this evidence is not countered with better evidence.

The media have quickly fallen behind the McCanns' (particularly after they took the Express group to court) and have instead attacked the Portuguese police rather than admit that there is some suggestion of guilt. The taboo of a mother hurting her child is as strong as ever - provided we are thinking about a middle class doctor who was holidaying in an exclusive resort. It is not so strong when thinking of a 'chav slapper living in a dodgy estate'.

I do hope the McCanns are innocent and that they find their child, and I also hope that Karen Matthews, and her seemingly despicable family see swift justice. But, possibly naively, I hope that people will think about the two cases and examine their own attitudes.

I find it distasteful that the Madelaine McCann story took over the media's attention when there were so many other stories that needed coverage and publicity. In 2004 there were 846 children abducted in the UK and this number has been increasing. The fact that one of these children was seen as more newsworthy than the others (however much it makes sense to anyone who understands the media) is unpleasant. Equally, on the 8th of May - 5 days after Madelaine went missing and right in the middle of the first wave of media coverage - several children were killed in Iraq. The story gets a ten paragraph article gets a ten paragraph article on the BBC website. It was not reported on the BBC news itself.

Fundamentally, the police in both cases should be allowed to do their jobs. The media have made the McCann situation into a circus and the Matthews case into a freak show. As much as it is the role of the media to select and promote stories it feels are of interest to its consumers - it also has a moral duty to represent the news and not only those stories that excite the middle classes into pity (in the case of the McCanns) or loathing and feelings of superiority (in the case of Karen Matthews).

These two women are very different to one another. One of them is almost certainly guilty of a heinous crime and the other will, hopefully, find her child. What they share is the glare of the media. Rather than judge Karen Matthews ourselves, however, we should look at the two cases and judge our own reaction to them.