Cameron Loses a Bicycle, but Wins an Election 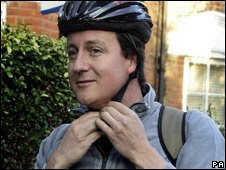 It is a little worrying that our next Prime Minister doesn't have enough sense to lock his bicycle properly. I mean, how can he possibly have thought it would be safe to fasten it to a bollard? Apart from itself being rather antisocial (one presumes that the bollard in question serves an actual purpose other than the one Cameron failed to find for it) it is worrying that he would choose an object to lock his bike to, that was entirely useless for this purpose.

Let's take a look at the image of a bollard shall we: 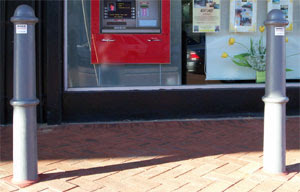 Anyone spot the problem? Yes, a bollard is short and does not have a top or a curve to it, thus making it easy to just pick up a 'locked' bicycle and carry it away. This is what has happened to the seemingly inept Mr Cameron. Surely, surely we can come up with better candidates for PM than Mr Cameron?

Not when the alternative is Gordon Brown. One could never imagine Mr Brown being so idiotic as to try to lock his bicycle to a post but, then again, it would be difficult to imagine the Prime Minister ever riding a bicycle to pick up some groceries from the Portobello branch of Tesco. But is that really such a great problem? Do we really need to elect media sensations like Barrack Obama or ersatz men of the people like David Cameron and George W. Bush? The short answer is no we don't need to elect these people but, in Western society we feel the need to elect these people.

There is no doubt that Brown has made a series of blunders himself: the decision to avoid ratifying the Lisbon Treaty at the same time as other leader was, frankly, an embarrassment; the decision to pump so much money into the NHS with few controls over how it was spent is part of a legacy of waste left from his time as Chancellor; the abolition of the 10p tax rate and the weak attempt at appeasing the electorate was the final nail in the coffin of this government. However, Brown as Prime Minister has personally made very few errors. It is true that he lacks style and, to some extent, even substance, but one cannot argue that his is ineffective. Indeed, the weakness attributed to him as a leader is more of a general weakness when it comes to the government as a whole.

This is a dying government. After last week's humiliating record breaking defeat (http://news.bbc.co.uk/1/hi/scotland/glasgow_and_west/7522153.stm) in Glasgow, it is not surprising that Labour backbenchers and party activists are demanding Brown's head. However, it does not matter who would come in to replace Brown as he is just a figure of hate around the country - hate that is directed towards the government as a whole.

It is rare that political groups receive much attention on Facebook. Indeed , with the exception of the ubiquitous Barrack Obama , there are few that receive much attention. However, anti-Labour groups such as 'Gordon Brown is a Twat' have become increasingly popular. The fact is that the government has been in power too long and they have got far too used to choosing their policies to appease Middle England. People want a change and the Labour heartlands (such as Glasgow East) no longer see the party as representing themselves. The government are earnestly defending policies which appeal to Middle England such as identity cards and longer detention, but they have already lost the support of this part of the electorate who, with the economy being a little shaky, have run back to the Conservatives in their droves.

It is irrelevant whether Cameron is as inept a leader as he is at the rather simple task of locking a bicycle. The fact is that Gordon Brown and his Labour government cannot win the next election. Even if the Tories were to put forward a proud toff in bloodied hunting apparel, they would still win the next election; even if they put forward Iain Duncan Smith the 'quiet man 'would manage to mumble his way into office.

It is shame that we have to choose between these two leader and these two parties, and it suggests a lot about the state of our own democracy that we spend so much time thinking about the American political system. If only we could choose between Obama and McCain - we'd even be able to unite Europe in the common desire to see Barrack smile that smile and make us feel hope in the face of despair.

0 comments: to “ Cameron Loses a Bicycle, but Wins an Election ”