The Fear of Fritzl 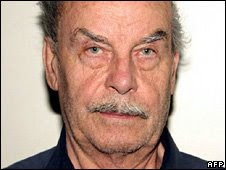 So we have another amazing, shocking and terrifying story! Lock up your kids, demand new laws, slap a GPS transmitter on your child - the paedophiles are here! Okay, so we all share a rather guilty fascination in the story and there are so many more elements to it than the usual paedophile shock stories.

The stories about Fritzl being a Neo-Nnazi, that his victim was his own daughter and that he had created an elaborate underground home to enjoy his 'other life' in are all well documented and reported. Fritzl managed to break every taboo known to man and did so in such an unfeeling, unemotional way that he must be a psychopath as well as, and I have to use the word, pervert. His actions in imprisoning his daughter and raping her over a period of 24 years, not to mention the abuse the children endured (including, in all likelihood, the rape of one of the children he had conceived with his own daughter) marks him out as a true monster. However, it also marks him out as a celebrity as infamous as other monsters like Jack the Ripper, Ted Bundy, Harold Shipman and oh so many others.

These are the real boogie men we hope our children will not encounter and yet it is the adults, the parents who are the ones who are hiding under the bedsheets, too scared to look.

Paedophiles are the big thing right now. It's hardly news to say that the media use fear in order to sell stories. However, in the UK in particular, there is a political dimension to the newspapers' use of paedophile stories. With Fritzl the right wing newspapers are happy to tell you how much this kind of thing could only happen in a country as Germanic as Austria and yet with our home-grown paedophiles they bellow out vitriolic rhetoric, demanding stronger laws, more police and better family values. There are many problems with families in the UK but one of them is certainly not allowing their kids to roam the streets unprotected. The fact is we are keeping our children in the house on a diet of video games and no exercise making them mal-adjusted and fearful of the outside world.

It was only in 1875 that the age of consent was raised to 13. Up until then it had been 12 for sometime and brothels specialised in providing young girls to their 'customers'. Right through to the 20th century the authorities turned a blind eye to flagrant paedophilia and other abysmal crimes committed against children. And yet we are told that society is becoming worse, that paedophiles are everywhere and the right wing newspapers cry for a return to 'Victorian values'. Well I'm sorry, but those same values meant that children were regularly treated as sex slaves by sexually depraved, but otherwise 'respectable' men. We should never go back to such a dark time, however much the Daily Mail would love to.

It is understandable that parents fear for their children. However, it is a disgrace that newspapers like The News of the World should manipulate this fear and that those same parents should turn into mindless thugs. Fear is something politicians use, parents and couples use and the media was born to use, but we should all be more aware of it and its influence upon us.

There is not a Josef Fritzl living around every corner; another Ian Huntley is not likely to attack your child; the number of paedophiles is no higher than before, they are just publicised more. Do not make celebrities out of them and do not teach your children to be frightened of boogie men.

Lastly, I advise all readers to view the excellent Brass Eye mockumentary on paedophilia and try to laugh, if not at your own fears then at the fears of society as a whole.