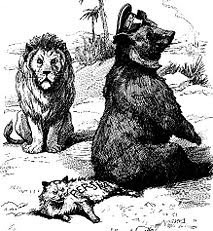 The Russian Bear was, in the nineteenth century, depicted as huge but slow and cumbersome. However, like bears themselves, Russia may be large but it can be both fast and lethal when it wants to be. Indeed, Russia has, under Putin, become a country that the world can once again respect and fear.

There is little doubt that Putin in his new role of Prime Minister is continuing to rule the country. He is the new Stalin or 'man of steel' and his grip on the country is strengthening and, with it, the control of a political system which owes more to the KGB than it does to Western democracy.

Putin's biggest achievement was in prising control of his country's massive oil and gas reserves from the various oligarchs who had effectively been handed Russia's riches because of the poor decisions of a weak leader (Yeltsin). Putin's managed to do this through a mixture of political shrewdness and outright brutality. Several 'refugees' from Putin's revolution now live in London (the most famous being Boris Berezovsky) and as a result Britain has often been the target of Putin's ire.

We have thus seen, more than any other Western country, the power and brutality of the Russian state, no less in the murder of Alexander Litvinenko where the British government has made it clear that they feel the Russian state was involved. In addition, we have seen the removal of British Council workers from the country on spurious grounds along with harassment for other representatives of the UK.

Also, Russia's neighbours have been feeling the full force of Russia's might. The Ukraine has seen Russia's interference in the election of Viktor Yushchenko, including accusations that Russia had some role in his poisoning and even Belarus, apparently in union with Russia, has been held to ransom by Russia and its control over gas and oil. Now it is the turn of Georgia and it seems astounding that the West can be at all surprised that Russia has chosen to use military means to control the former Soviet state.

Russian ministers have claimed that they are only defending the rights of the people in the breakaway states of South Ossetia and Abkhazia. It is certainly true that the Georgian forces had attempted to enforce control over these areas, but the Russian bear made no effort at diplomacy and its military response has been excessive to say the least. Equally, in Russia's targeting of Georgia's oil pipeline they have shown a desire to maintain their control over Europe's energy.

With the current economic climate and the desperation for fuel, Russia has found its most potent weapon and the West has no answer. It is true that George W. Bush has condemned Russian military action and suggested that Russia could be held to account, but it is hard to imagine even the USA acting on its threats. Putin knows this and so the Russian bear has out-manoeuvred the West and proved that it is once again powerful and far from cumbersome.

0 comments: to “ Beware the Russian Bear ”